Ghana: "I Have Been a Stowaway" 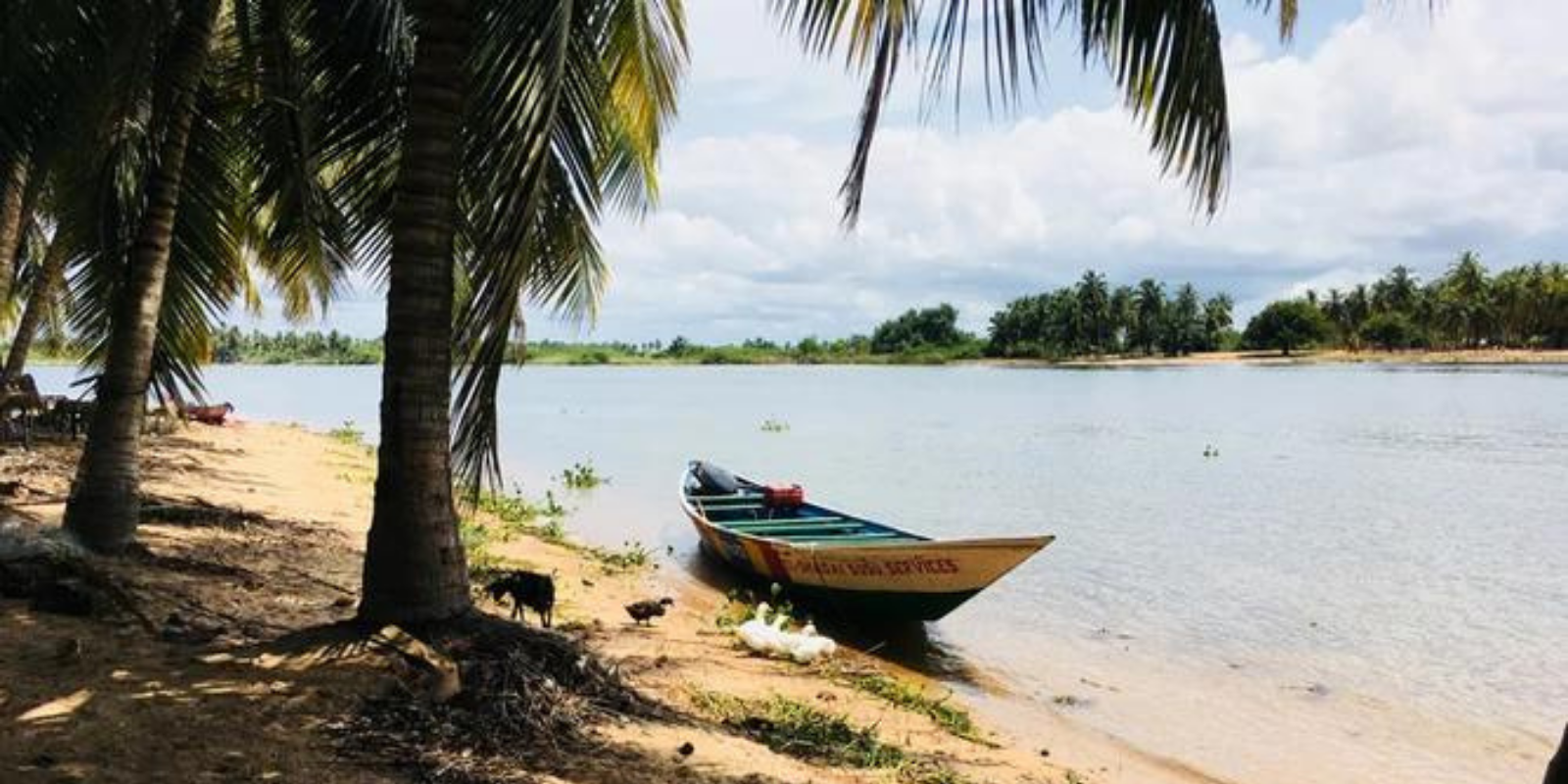 Located in West Africa, Ghana sits on the Atlantic Ocean where its coast stretches over a 330-mile distance. Seven percent of Ghana’s total land area lies along the coast and is home to over five million people. The livelihoods of many coastal residents depend on the fishing industry.

Yet, up and down the coast, due to a combination of factors, it has become more and more difficult for local fishermen and -women to make a living in recent years. First, Ghana’s waters have become severely overfished. This is largely a result of illegal fishing activities by mostly Chinese-owned industrial fishing vessels which enter shallow waters where the artisanal fishing community gets their stocks. Furthermore, in places like Keta, located on the East Coast, rising sea levels have exacerbated the perennial storm surges and tidal waves such that the waters have become too dangerous for small and non-motorized fishing boats to enter.

This, coupled with a general lack of jobs—as reflected in the country’s high rates of unemployment and underemployment, especially among the youth—has contributed to high rates of emigration. As undocumented labor migrants from the coast seek better employment opportunities elsewhere, they often make dangerous journeys as stowaways on cargo ships bound for Europe, the US, and Canada. Many stowaways are unsuccessful, often caught on board and subsequently deported back to Ghana.

Displacement due to rising sea levels represents another driver of emigration, as well as internal migration, as coastal residents lose their homes to the sea. This is what we learned in the process of producing the Ghana film for Climate Refugee Stories, documenting stories of return migrants and individuals and communities fighting erosion and flooding and experiencing displacement as a result of climate-related stressors—particularly rising sea levels— along Ghana’s east and west coasts, including island communities on and near the Volta River, Ghana’s main river system.

Overall, we found that, over the last 30 years, many coastal and island communities have lost vast lands to the sea, which has broken down and washed away hundreds of homes or buried them in sand. This has left residents with no choice but to relocate inland, yet many do not have the resources to do so. Furthermore, return migrants face challenges with economic reincorporation as they struggle to find work and housing.

Such challenges of reincorporation were revealed to us by return migrants like Michael and Jonathan, both of whom are from Takoradi, located on the West Coast and home to the country’s second largest port. Both Michael and Jonathan were stowaways on cargo ships—bound for Senegal and Greece, respectively—and both were discovered on board and deported. As Michael, a fisherman, told us,

“This is my third time of being caught and thrown back [to Ghana] after being a stowaway. This time around I decided not to go back again. I decided to stay home to do something for myself but it has not been easy. What we do, we are fishermen, we normally go fishing but these days it’s hard to get a catch. Things are very hard…Fishing is really bad. We go and we never get any catch. We just go patrol the sea and don’t get any fish and burn our fuel which results in debt. Sometimes during fishing season you get some catch but sometimes the catch you get, the costs put in it is more than what you have gained.”

Jonathan has similarly struggled since returning to Takoradi. As he reported to us:

“I don’t have a job…this morning, when I woke up not having anything to eat, I went to the beach to look for firewood to be sold before I could get something to eat. I’ll get 4 cedi [$0.75 USD] for that [firewood I collected].”

Both Michael and Jonathan admitted that due to their economic hardship upon return to Ghana, they considered attempting another stowaway journey. This is despite the dangers they have faced as stowaways. Michael said on his most recent trip, he and the other stowaways were beaten badly by the ship’s crew members upon revealing themselves after one of the stowaways fell gravely ill and spoke of the risk of being thrown overboard by the crew if discovered. As Michael explained:

“As I sit here right now, I’m scouting for any of the ships that I could use to stowaway because things are just so hard right now in Ghana. And it is the reason why most of the youth are gathered at the port right now, to get an opportunity to stowaway…For stowaway, it’s not about where you want to go. Anywhere abroad is abroad.”

Further down the coast, in and around the town of Keta, we collected stories from people who have been displaced by the huge tidal waves that have washed away their homes. Tidal waves have been a perennial occurrence along the East Coast for decades. However, the devastation has increased dramatically in recent years due to rising sea levels and illegal sand mining—often committed by the same people who have lost their fishing livelihoods, desperate for an alternative source of income— that has eroded the coastline, rendering their homes more vulnerable to the encroaching sea. In fact, the areas around Keta—including the communities we visited in July 2021 shortly after hundreds of residents were displaced by tidal waves, such as in Solakope, Fuveme, and Adevazi—were once again hit hard in mid-November 2021, as a tidal surge swept through more than 500 houses, rendering at least 4,000—and possibly as many as 7,000—residents homeless.

In July, we spoke to people like Joseph, Amele, and Abina, who were displaced after they lost their homes to tidal waves. They now live in temporary thatch houses made from coconut palms in a makeshift camp built perilously close to the sea on private land without the consent from landowners—as Joseph and other reported to us, the landowners want to be compensated by the government before allowing anyone to stay and they are still waiting to be paid. Like so many other displaced residents here, Joseph, Amele, and Abina do not have the resources to relocate and rebuild further inland where they would be protected from the devastating waves and flooding. Joseph, a man in his 30s with a wife and young children, told us:

“I never expected the sea waves to come close to us as they did. We thought we had more time…We’ve been asked to relocate to another land which is inland but the space is not big enough to accommodate all of us. The new place given to us is similar to this place and we’re afraid that the tidal waves will also occur there.”

Similarly, Amele, also in her 30s, with a husband and young children, reported to us:

“I do not have a job. When the fishermen go to the sea I try to help them get a little bit of catch but since the sea started rising, the tidal waves and everything, they no longer go fishing anymore [because it is too dangerous]. It’s been very hard for me and my kids…We would want to relocate but we do not have the money. That is why we are stuck here.”

“I just heard that one of my relatives has been swept away by the sea. That’s why I’m crying…I would like to relocate but I do not have the resources. Where I sit right now, I’m sick. Without holding a stick, I cannot even walk. Without the means, I cannot contemplate relocating without any help.”

We also collected stories from people living on Azizakpe Island, located on the East Coast approximately 30 miles west of Keta and situated where the Volta River opens into the sea. Azizakpe is also experiencing devastating flooding due to rising sea levels. We had the opportunity to interview the island’s sub-chief. This is what he reported to us:

“[When islanders’ houses are washed away by the sea], some with no families or anywhere to go get stranded. The people who have family on the other islands or on mainland, they were given assistance by these family members. The problem is, if you [relocate] to the mainland and you don’t have land, you don’t have a house, you get stranded there…Even if you rent a house inland, the type of job you do there, it’s not what you’re an expert in, so you can’t survive well. What are you going to eat, how are you going to survive?”

The Ghana film also features the work of New-Age Environmental Development of Africa (NED Africa), a Ghana-based social enterprise and charity organization, where I serve as the Executive Director, which is dedicated to addressing climate change in cooperation with local communities. NED Africa aims to support internally displaced persons and return migrants by providing sustainable livelihoods through the establishment of new green industries in Ghana, such as biogas.

One of NED Africa’s projects is coconut oil processing and biogas production on Azizakpe Island. Most islanders live on fishing, shrimping, pig rearing, and oil processing from the island’s abundant coconut trees. Working with a group of women residents, we are in the process of establishing a women’s cooperative to process and sell organic extra virgin coconut oil using a commercial processor that meets the standards for export. We’ll also use coconut husks and pig manure to produce biogas for boat fuel and electricity.

Recognizing that many of the individuals we spoke to who face displacement and economic hardship would prefer to stay in Ghana, NED Africa is working to create opportunities for them to live well within the country. For us, this represents one manifestation of climate justice: that the people most directly affected by climate change receive the opportunity to meaningfully benefit from the innovative solutions being developed to mitigate and adapt to it. That is, solutions to climate change must be developed with climate refugees in mind.

NED Africa is producing an ethnographic film that captures stories of return migrants to coastal and island communities impacted by rising sea levels along Ghana’s coast which covers a distance of over 300 miles and is home to 5 million residents.

With our film, we are documenting stories of individuals and communities fighting erosion and coastal flooding and experiencing displacement as a result of climate-related stressors–particularly rising sea levels–along Ghana’s east and west coasts, including island communities on the Volta River, Ghana’s main river system. Our participants also include people who have been deported and other migrants who have returned to Ghana, mostly to the west coast, after such displacement. The film also features NED Africa’s work to establish new green industries in Ghana which support internally displaced persons and return migrants and prevent the necessity of undocumented emigration by providing sustainable livelihoods. We aim to use the film and storytelling to raise awareness of the impacts of climate change on coastal communities and of ways to mitigate it and slow global warming. We also aim to highlight the dangers faced by climate refugees who feel forced–due to homelessness, hunger, and unemployment brought on by displacement–to immigrate to other countries without documentation and the vulnerabilities they face upon return to Ghana in order to educate would-be migrants.